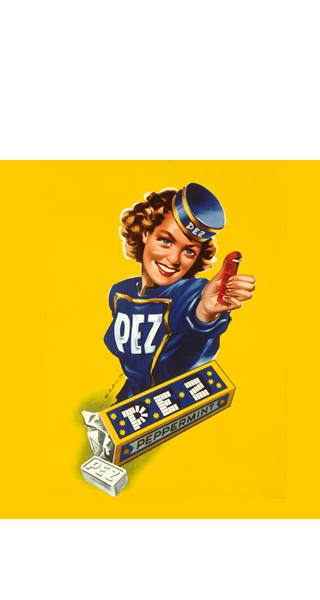 The cult brand PEZ – a brief introduction to a long story

When Austrian Eduard Haas III created the first peppermint candy in 1927, he probably didn’t realise that he was laying the foundation for a brand classic.

He named his brand PEZ – a name derived from the German word for peppermint, PfeffErminZ. PEZ candy still retains its original form to this day. The candies were made using extremely high-quality peppermint oil and sold in small tins. Targeting the high society, Eduard Haas III marketed PEZ as ‘the high society mint’.

Although the candies were a hit and sold well, Haas was still not satisfied: the small tins were nice and handy, but by no means the perfect way to enjoy mint. He looked for a finer, more hygienic way that would also enable people to share the candy. This led to the idea of creating a PEZ dispenser.

The first PEZ dispenser designed by Oskar Uxa was launched onto the market in 1949 as a golden lighter – and as a reminder that Eduard Haas III actually invented PEZ as a healthy alternative to cigarettes. Hence the slogan in subsequent years: ‘Smoking prohibited – PEZing allowed’.

PEZ was first and foremost promoted by PEZ ladies. In the 1950s and 60s, the PEZ Lady ultimately became an icon. The artwork of Gerhard Brause in particular has continued to enjoy cult status to this day. PEZ vending machines were set up throughout Germany and Austria and only disappeared from the public eye due to the introduction of the euro. Today, they are coveted collector’s items.

In the early 1950s, Haas decided to conquer the North American market with PEZ. Appearing at trade fairs in the US, he realised that PEZ was particularly popular with children. He thus began making fruit-flavoured PEZ candies. Deeming the lighter design of the PEZ dispenser unsuitable for his new target group, he came up with the idea of replacing the ‘lighter head’ with comic-figure heads. In 1962 he met Walt Disney and signed the first licensing agreement, making Mickey Mouse and Donald two of the first licensed characters to appear on a PEZ box.

PEZ was such a big seller in the US that in 1973 the company built its own factory in Orange, Connecticut, enabling it to produce PEZ locally. At the time, PEZ was already a market success in Japan and many other countries around the world. PEZ became part of the pop culture. This is also evidenced by the fact that PEZ dispensers were increasingly appearing in films, series and TV shows and being used more and more as artists’ motifs. The people at PEZ took great joy in discovering a PEZ dispenser in Steven Spielberg’s classic E.T., watching Audrey Tautou being given a PEZ dispenser as a gift in the film Delicacy, and seeing a giant Hello Kitty PEZ dispenser fly through Marvel’s Ant-Man and the Wasp.

So just what makes the PEZ brand so fascinating? Marketing Manager Gabriele Hofinger puts it in a nutshell: ‘PEZ is the combination of two seemingly contradictory elements. On the one hand, few products have changed as little as PEZ over the course of their lifespan: the shape of the candies is the same as it was back in 1927 and the dispenser has only been slightly modified since 1949. Yet PEZ is still as highly innovative as ever. Licences are always up to date, new flavours are constantly being created and tested, and assortments are expanded with the greatest finesse.’

More innovations are sure to follow and who knows what PEZ will come up with next!