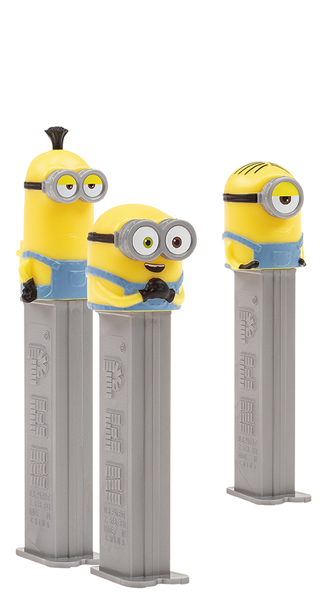 Illumination’s Iconic Minions Return to the Big Screen Summer 2020 in Minions: The Rise of Gru

Since their breakout role in Illumination’s Despicable Me in 2010, the Minions have become global pop culture icons, capturing the imaginations of audiences worldwide with their larger-than-life personalities. Following the blockbuster debut of the first film, Illumination released three equally successful chapters in the franchise -Despicable Me 2, Despicable Me 3 and Minions, generating more $3.72 billion at the global box-office and garnering two Academy Award nominations and two Golden Globe nominations. Today, the iconic film series holds the title of highest grossing animated film franchise of all-time.

In 2015, the world turned yellow again overnight when Minions hit theaters. From toys to high-end fashion collaborations, to fast-fashion, home goods, consumables and more, fan ship for the Minions skyrocketed. And, naturally, PEZ released a Minions collection, too, consisting of Stuart, Dave and then Jerry, which sold like hot cakes the world over.

Upcoming for the franchise, Minions: The Rise of Gru, is set to dominate the global box office when it hits theaters in July 2020. In this newest instalment, audiences will find the Minions united with a young Gru, wreaking havoc in his 1970s suburban neighbourhood. When Gru gets a chance to join the world’s baddest villains, The Vicious Six, he has to choose between his dream job and the Minions. Kevin, Stuart and Bob go to great lengths to win back their “mini-Boss,” trekking through the desert, piloting an airplane, and even learning kung fu from an unorthodox teacher. Gru learns that loyalty and friendship make the best villains stronger and that together, he and the Minions make the most despicable team.

Inspired by the new film, PEZ is debuting a new collection, which will feature the entire upper body of the Minions atop the dispensers – overalls included! Protagonist Kevin, rebel Stuart, childish Bob and a new Minions character will appear as PEZ dispensers. And to top it all off, a whole new flavour will be added especially for the Minions range: you guessed it, banana!